Shortly after the end of hostilities, Bomber Command allowed members of the ground crews, non-technical personnel and WAAF to fly over Europe.

Known as "Cooks Tours" the opportunity was taken up by many who wished to experience flying, many of whom had never flown before, but more importantly allowed many of those who had served in support of the Command's aircrew to see first had the damage which had been inflicted upon the targets; to which to many had never been known or had been merely names on a map or spoken during a conversation

Additional donations of similar images would be gratefully accepted. 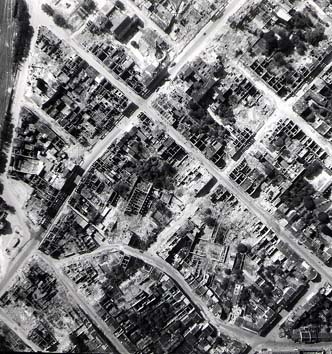