The Sinking Of The Battleship "Tirpitz"

The German Battleship Tirpitz was launched at Wilhelmshaven on 1/4/1939 by Frau Von Hassel, grand-daughter of Admiral Von Tirpitz in the presence of Adolf Hitler. It was February 1940 when she had completed her sea trails and became a menace and a threat even though she spent the majority of her life at anchor in Norwegian Fjords, a constant threat to Allied convoys in support of the Soviet Union which pass the Northern Norwegian Coast.Although Tirpitz rarely put to sea her very presence tied down a large number of Allied warships, that could have been used for the protection os the Atlantic convoys. The was amply demonstrated in July 1942 when convoy PQ17 was given the order to scatter when intelligence was unable to confirm that Tirpitz was not at anchor.

Tirpitz, sister ship of the Bismarck had a displacement of 42,900 tons some 7,900 tons heavier than the King George V class battleships of the Royal Navy.

This increase in weight was accounted for the most part by the German Ships extra armour. To give protection against Naval Gunfire and Torpedoes Tirpitz had a vertical belt of Side Armour of 12.6 inches, extending from 8 feet below to 8 feet above the Waterline. In addition extending to Deck level was a vertical belt of 5.7 inches thick armour extending to the deck level. On deck as protection from Aerial Bombs horizontal armour of 3 inches thick existed to protect machinery spaces, with 4 inches of armour above ammunition Magazines.

As this battleship would have no need to pass through the Locks of the Panama Canal she had an abnormally wide beam of 118 feet giving her a greater degree of stability than any allied Ship.

British Air and Naval forces made numerous attacks on Tirpitz; the first was when she was at sea off Norway on 9/3/42 when 12 Albacore Torpedo Bombers were launched from HMS Victorious.

The Battleship merely headed into the wind at maximum speed denying the slow biplanes the speed advantage to carry out a co-ordinated attack on her; even so 7 Torpedoes were launched night attacks by Halifax Bombers on 31/3,28/4 and 29/4 when the ship was anchored at Fotten Fjord near Trondheim achieved little apart from many years later a significant relic in (the form of the wreck of a Halifax Bomber) in Bomber Hall at the RAF Museum Hendon.

On 22/9/43 an ingenious attack called "Operation Source" was launched by the Royal Navy in the form of Midget Submarines .The Battleship Was at anchor in Kaa Fjord in the North of Norway and 4 two ton mines were planted on the sea bed beneath the vessel. Two detonated and caused widespread internal damage requiring repairs lasting a few months.

On 3/4/44 FAA Barracudas dive bombed the ship and obtained 12 hits. As the bombs were released from too low an altitude, however they failed to gain the velocity required to penetrate the Deck armour. Repairs to the superstructure were effected and she was ready for sea within the month.

The installation of smokescreens around Tirpitz nullified further FAA attacks on 17/7/44 and 22/8/44and ruined the attempt on 29/8/44. Not unnaturally Churchill turned to the services of the RAF Bomber Command.

The "boys" were the one 2 squadron's capable of carrying the weapon known as Tallboy; 617 and IX Squadron's 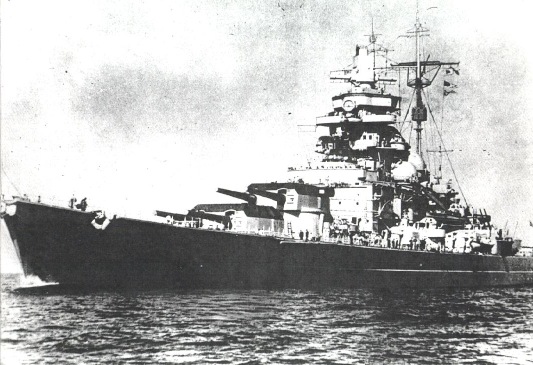 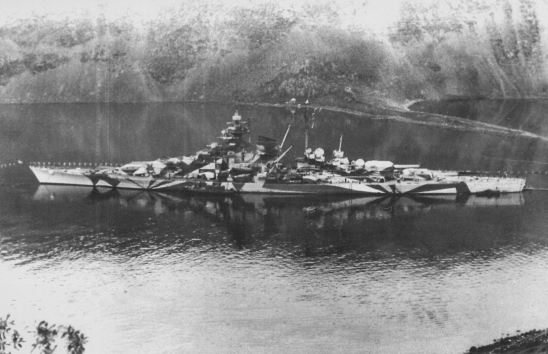 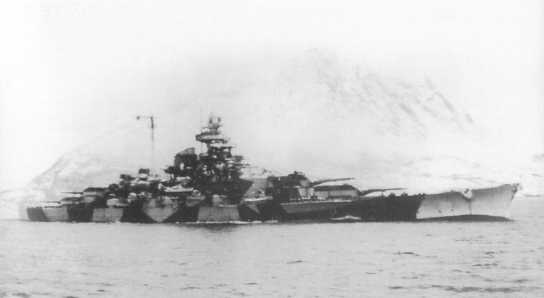